Consistency in branding and messaging across collegiate departments conveys professionalism and excellence to internal and external audiences. As a College, we strive to uphold branding standards that are flexible enough to allow creativity and innovation, while stringent enough to ensure that all content is a positive reflection of The University and our students and contributes to a greater understanding of our mission and core values as an institution.

The Goodwin University logo should appear on college materials that are distributed internally and externally. When used on top of a darkly colored background, a white version of the logo may be used; otherwise, the original color version must be used. Applying alternate colors to the logo is not permitted.

The logo may appear any size; however, the proportions must remain the same as the original image (i.e. do not stretch the logo to make the image wider or taller).

The official College colors are Blue and Green. They are represented in The University logo with the following Pantone colors: Book — PMS 328. Text and waves — PMS 541. The Marketing and Communications Department can help vendors accurately match The University colors for various items. 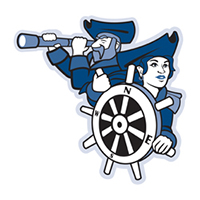